Hands with nails, eyes that mirror our own, rich social and emotional lives. These are just a few of the attributes that strike a chord with us when we take a closer look at our closest living relatives, the Great Apes. Despite sharing 95% of their genes with  humans, gorillas, chimpanzees, and orangutans  are more threatened than ever, highlighting that this human kinship link has accounted for very little. Perhaps this strong physical resemblance does not sit as comfortably with us as we think. 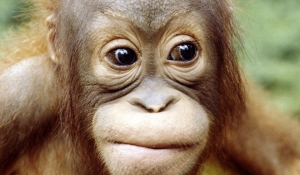 These animals have always affected us and are now becoming more familiar through scientific research and sustained media interest. In the Rwandan Kinyarwanda language, the word for primates is in a separate category to the word for other wildlife and the name orangutan in Malay means ‘person of the forest’. In 1975 Carl Linnaeus made the groundbreaking attempt of classifying all living beings and in the published ‘Systema Naturae’ he placed man and apes together in the order Anthropomorpha. Despite this classification we continued to shoot them just like any other museum specimen and in the 18th and later centuries their presence was increasing in zoos and circuses, even Darwin’s origin of species common ancestry couldn’t shake the view.  To put it simply, there are two sides to our perception. Whilst one emphasises the similarities, the other emphasises  the differences, how the apes are almost but not quite human. 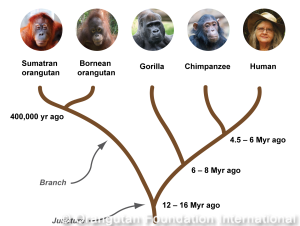 Religion plays an important role here. It is suggested that the Christian view that god gave man dominion over all living things (Genesis 1:28) has coloured much of Europe’s perception of the great apes. However, in Muslim societies they cannot be eaten and they have even been incorporated into Buddhism as the three wise monkeys (hear no evil, see no evil, speak no evil). Ancient Egyptians worshipped Ape God Thoth, guarder of the moon, measurer of time and scribe to the gods. They have also appeared as mediator between humans and the gods in Japanese writing. But beliefs and taboos appear to have limited role in conservation, particularly as our attitudes to nature and life itself undergo changes in response to the rapid growth of human population. It is true to say that apes are doing well where they are seen as an asset, such as the gorillas of Rwanda and Uganda where they are generating hard currency and employment, motivating conservation efforts. However, on the whole there is this increasing pressure to bring in big development in exchange for biodiversity.

In a modern society we appear to have assigned chimpanzees the role of the clown and have made them substitutes for people, particularly when it comes to experimentation and even shooting them into space. Orangutans are portrayed in films as tragic mockeries of human beings. They are regarded as human, but with no human rights. We exploit them for their human qualities but deny them the protection and respect that those very same qualities deserve, despite consistently demonstrating that they are self-aware beings. Evidence of culture amongst the great apes is high, particularly among chimpanzees. The use of tools and behaviour patterns particular to each community are learned socially and passed from one generation to the next; this is what is meant by ‘cultural’ traits. These rich and varied cultural traditions are expressed in the way chimpanzees build their nests, process and eat food and maintain social ties, comfort and hygiene, etc. Sound familiar?

The conservation crisis facing the great apes has arisen over the last 50 years and has become more acute in the last 20. Hunting, habitat loss, low environmental education, under resourced environmental management, weak rule of law, population pressure and poverty are factors having a detrimental impact on populations. Is it simply our attitude that has resulted in our closest relatives receiving relatively little attention in terms of conservation until recently? Particularly when compared to other species, such as elephants, whales and tigers. Is it easier to feel concern with more distant species, sparking an urge to protect? As a society we need to think about how we are like them as opposed to how they are like us. Perhaps this will help society realise that we have a responsibility to protect and after all, if you cannot protect those who are closest to you, who can you protect? 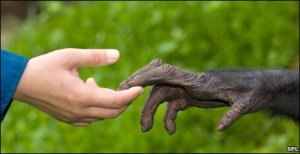