We all know Frogs are masters at jumping, but did you know that some species still struggle to land both smoothly and gracefully?

Naively, I assumed that all frogs jump in a similar manner. To me, a jump is a jump.  However, after further research I discovered that this form of locomotion is subdivided into four stages; propulsion, flight, landing and recovery. When studying the hop you can see the hind legs rapidly extend, launching the frog skyward. As it soars though the air it rotates forward and then uses its forelimbs to efficiently absorb the force of its landing. 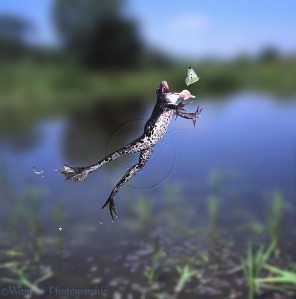 Originally it was thought that the primary purpose of a jump was to evade predators by escaping into the water, where a graceful landing isn’t required. This is supported by a study on the Rocky Mountain Tailed Frog Ascaphus montanus, in which they fail to withdraw their hind legs, resulting in a haphazard landing. However, research has shown that some frog species have a more terrestrial lifestyle, therefore an efficient land is necessary to continue hopping in quick succession, evading predators and targeting prey.  This would explain the mechanics of the jump technique of the Northern Leopard Frog Lithobates pipiens and the Oriental Fire-Bellied Toad Bombina orientalis, which have been recorded and compared. During mid-leap, both species withdrew their hind legs mid-flight, allowing them to prepare for subsequent jumps. This raises the inevitable question, have they evolved differently? 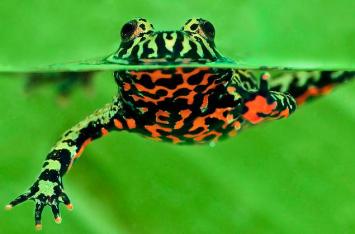 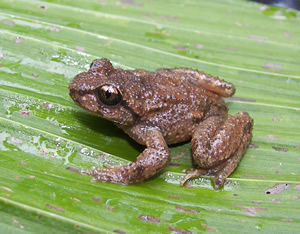 It also raises another question, why do some species move in peculiar ways? It is common knowledge that Kangaroos have powerful hind legs and can jump efficiently at high speeds, but how is this possible taking into account their large frame? The main reason is their unique posture; it allows them to reach high speeds without inflicting any damage. As Kangaroos are large marsupials it is difficult to comprehend how their bones can withstand such weight and pace.  At slow paces they ‘crawl’ using their forearms and their tail as fifth limb to push themselves along. However at faster paces they hop, using their tail as a rudder to help with balance and direction. This is a surprisingly efficient form of movement, as the higher the jump, the more energy is stored to power the following jump. In this way, Kangaroos reduce the total amount of energy required. 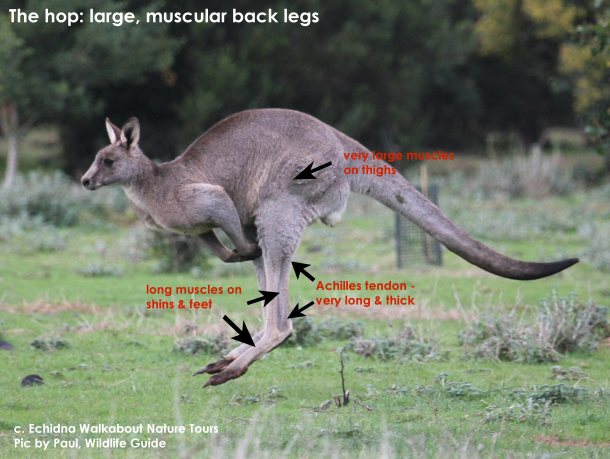 Recently, the same technology as that used to train Golfers has been used to study Kangaroo locomotion. An outdoor infrared motion-capture indicates the forces distributed within each bound of the Kangaroo.  Small plastic markers are stuck onto the desired leg, which then analyse and register movements. This motion-capture has the ability to look past infrared light from the sun, focusing only on the moving subject.

It is hoped that by studying the downfalls and advantageous features of animal locomotion we can advance our own technology. Understanding the locomotion is also paramount for developments in veterinary medicine and could prove useful in conservation efforts.