Whilst I was still a student, I spent months looking for a worthwhile volunteering placement to keep me busy in the summer holidays. I finally decided to spend a month in Tenerife as a research assistant for the Atlantic Whale Foundation.  My previous work experience and placements have all been terrestrial based so I felt that it was important to have a little dip into the world of marine conservation.

The placement involved working as a research guide on a number of different whale watching boats, collecting data on cetacean behaviour and pod dynamics. On each trip you were guaranteed to see short finned pilot whales and bottlenose dolphins and I was certainly not disappointed on this front. I also had a bonus sighting of a bryde’s whale, a much larger, migrating species. To help the project identify resident individuals, an important job was to photograph the fins of pilot whales that were spotted. Not only does this update us on the status of known whales, but it also helps us to identify any new members. With other members of the team I also helped to engage members of the public using pictures of fins to see if they could identify any whales by name. Work on the boats also included gaining petition signatures in a bid to stop whaling in countries such as Norway, Iceland and Japan.

Due to the high number of students living in the house, there wasn’t much of an opportunity to get out on these boats, which was very disappointing. Because of this, I asked the Trustee for a project of my own, which involved putting the GIS skills I had gained at university into use. I identified wildlife corridors in Sri Lanka, which could potentially be utilised in order to minimise conflict between leopards and humans. Suitable areas were to then be communicated to other students conducting research in the field. I also tried to carry out other research projects using the Cetacean database, which dates back many years, but found that the data proved to be unreliable due to many gaps in data collection, making it difficult to reach any strong conclusions. Unfortunately, this caused me to question the overall mission of this organisation. With no real resident researcher and an ever changing team of young students, this data was being wasted and knowledge was being lost. I was further disheartened when the trustee was quick to say he didn’t believe in science as he is an economist. For me, it became very clear that this is a glorified whale watching holiday, not the conservation project it is advertised as. 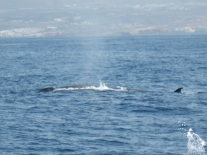 When you are not working on the boats, you find yourself with a lot of free time on your hands. Determined not to waste this time, I decided to volunteer at a local dog shelter, helping out with daily animal care and observing operations. I was even allowed to do some minor dental work. My final involvement with the charity was taking part in a dog walk in Santa Cruz to raise awareness of the work done. It was a fantastic day out and one of the highlights of my trip, the dogs at the shelter are very well looked after and all of lovely nature.

During my stay I also took part in other fundraising events such as climbing Mount Teide, the third highest volcano in the world (which is also overdue an eruption!). This was by far the highlight of my placement as I was lucky enough to be part of a really supportive team and making it to the top, beating the record climb time was incredible, just in time for sunrise. I also completed my PADI Open Water Diving qualification with other keen students, which was a really good way of networking with others, sharing knowledge and I.D skills.

I also took the opportunity to assist another team member on a project she felt strongly about. An Orca was found stranded in Norway and rescued by a local Dolphinarium. However, rather than releasing her back into the wild as promised she was sold to Loro Parque in Tenerife and is now performing in shows. We visited the park to film her behaviour and check her wellbeing. Footage collected, information obtained from her trainer and scientific journals were to all be used to produce a report on this issue and to assist in current campaigns.

Overall I have mixed feelings about this placement as I didn’t get the skills or knowledge I would have liked. However, it was good social experience.  I wouldn’t encourage other students to volunteer with AWF if they are looking to gain transferable field work skills as I do feel you get more out of placements which are free. However, this certainly shouldn’t deter students from taking part in a placement abroad as I don’t regret the experience, as despite not meeting my expectations I did enjoy my stay, meeting some great people and trying out new activities. The best advice I can give you is to research, research ,research! Important things to consider are:

At this point in my life I was very uncertain of the direction I wanted to take in the conservation sector and it is still a tricky thing to work out even now. I have learnt that uncertainty is OK and getting out there and experiencing the wonders of that big wide world out there is the best thing you can do, be it just down the road or the other side of the world. After all, it was this placement that confirmed for me that a career in terrestrial conservation is more up my street!