The selfie. Most of us would be lying if we said that we have not taken the odd selfie for whatever reason, as vain and self indulgent as they do seem. But is choosing to document and share the death of an animal in this manner completely disrespectful or actually, an acceptable and valid format in which to do so in our current generation, which is so heavily driven by social media?

In fairly recent news, there have been a number of sperm whale strandings in Europe over a duration of a couple of weeks. Quickly after the news of these stranding broke, rage followed as images started to surface online of individuals smiling next to the dead bodies, even making it a family photo in some cases.

I am not an avid selfie taker by no means and when I first read the articles and saw the photos, I must admit I was initially aggravated at the fact that the selfie culture has even managed to extend its way into the death of such magnificent creatures. To stand there, smiling away as if it is the grand canyon, to me seems bizarre. Would we do this with another dead animal, or even a human body? Probably not. A dead whale is a dead being and one that deserves dignity and respect.

As I started to spend more time thinking about this, aggravation soon turned to curiosity. It is interesting to think about how others perceive the natural world and to explore the perceptions of modern culture. Why are some people not content with going to see the whales, taking a picture and being OK with that? Why is there this need to include yourself? Perhaps it comes down to how people choose to enjoy nature. If you include yourself in the photo then this may give it more of a personal meaning. For most, this will be the first time they will have seen a whale, dead or alive and this would spark excitement, leading to snapping away and allowing you to look back and remember that time where you were able to see a huge whale up close. But is this really creating a personal moment, when vanity is a buzzword so heavily centred in the selfie culture? Many of us like to show off what we have seen and done and the selfie is the perfect format to do so.

I cannot help but feel that if nobody showed and witnessed these strandings, then it would also be disappointing. This showcases our natural curiosity and surely when it comes to the natural world, where we are increasingly becoming disconnected, this may well not be so bad? I also like to believe that many would not just simply rock up to the strandings, snap a selfie and just leave. This natural curiosity would take over, prompting you to engage with others and ask questions, such as how this happened?, why so many whales? and to also observe the anatomy and shear size of the animal. You could almost say that this selfie notion opens up and initiates the curiosity of some. Despite the animal having passed, you can still appreciate many aspects of it and showing awe, I feel is a sign of respect in itself, as well as allowing yourself to learn and connect with nature, even just for moment, despite how poignant that moment is.

It also worth noting that this is no far cry to how early generations have reacted to these events. A 1602 engraving by Dutch artist Jan Saenredam illustrates a frenzy of onlookers and even individuals clambering on top of the body. Our curiosity proves timeless, yet I also wonder if others also found it distasteful back in the day? Selfie taking is also harmless when you compare it to those who scavenge for body parts, such as teeth, or even graffiti all over the body, showing absolute disrespect. 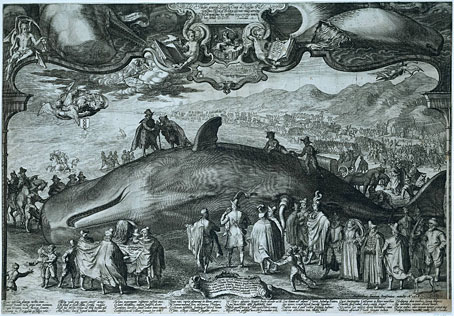 For me, I feel that there is a time and a place for a selfie and images of yourself with the dead whale is almost illustrating that you and the whale are what matters, not the whale. I am by no means judging those who choose to take selfies, but perhaps when it is about something altogether far greater and poignant, it may pay to think about it a bit deeper, before snapping away.