New Zealand. What is the first thing that comes to your mind when you think of this beautiful country? For most, I feel that it would be rugby orientated, with the All Blacks coming to the forefront of my mind, or perhaps the Lord of the rings? But for Howl and for many others, it is the kiwi bird that stands out the most and for a good reason. New Zealanders aren’t just called kiwis for nothing, nor after the fruit. They are in fact named after the kiwi bird – New Zealand’s most iconic bird species.

The Kiwi bird is truly unique; it is a bird, but it has features more characteristic of a mammal. When you see one up close, you notice that the feathers are different to those of most birds, they look more fur like. Although, if touched you can feel the feather structure, hanging loose to keep the rain out and the warmth in. Hiding within these fur like feathers is actually a very small pair of vestigal wings. But flying takes up a lot of energy and the marrow in their bones makes them too heavy to be able to do so. With the ground being so safe before the arrival of humans, they could save energy by walking.

Kiwi are nocturnal, which means that they come out of their burrows after nightfall to forage for insects, grubs, earthworms, fallen fruit and native plants. Whilst almost all birds get their information through their eyes, kiwi sense if through the tip of their beak and their cat like whiskers. It is suggested that evolution abandoned vision as a key sense because the energy they would need to use large eyes (as characteristic of most other nocturnal bird species) would not be balanced by the information gleaned from a dimly lit forest floor, especially since most of their food is hidden underground.

Despite this beak being fairly long, it is technically the shortest beak in the world.This is because, officially the convention to measure the beak of a bird dictates that the measurement be done from the end of the tip to the nostril. Since the kiwi’s nostrils are located at the tip, the distance from their beaks to their nostrils is very short. But it is the location of these nostrils that is important. By being at the end of the beak, combined with its large olfactory bulb, it gives the kiwi its exceptional sense of smell. Recent research has also revealed that kiwi beaks have specialized sensors at the tip which help them to sense tiny vibrations, which is essential for survival considering their poor eyesight. Combining both the exceptionally good sense of smell and the ability to detect minute vibrations using their beaks, kiwis are able to find these creepy crawlies moving under a layer of mud. As it walks, the kiwi taps the ground with its beak, probing the soil and sniffing loudly. It can locate an earthworm up to three centimetres underground. Once a snack has been located, the kiwi pushes its beak deep into the earth.

Nostrils at end of beak ©Kiwisforkiwi

What’s even more impressive is that a kiwi egg is the largest in the world in relation to the body size of the bird laying it. It takes between 16 months to three years for birds to be sexually mature enough to breed and this will usually occur between July and February. Incubation is done by the male and can take anything from 74-90 days. However, they are left to fend for themselves and are not taught to forage by their parents. When first hatched, the belly of the chick is swollen with yolk which will sustain them for their first few days.

How many species of Kiwi roam New Zealand?

Kiwi are ratites (a group of largely flightless birds). The closest relatives to kiwi today is the elephant bird from Madagascar. They are also related to emus and cassowaries of Australia, and the extinct moa of New Zealand.There are five species of kiwi. All are classified as Threatened or At Risk.

Brown kiwi – Live in the North Island. There are four distinct forms, including the Northland brown kiwi.

Great spotted kiwi/roroa – The giant among kiwi, this species lives only in the top half of the South Island.

Little spotted kiwi – The smallest and once the commonest kiwi is vulnerable to stoats at all stages of its life. 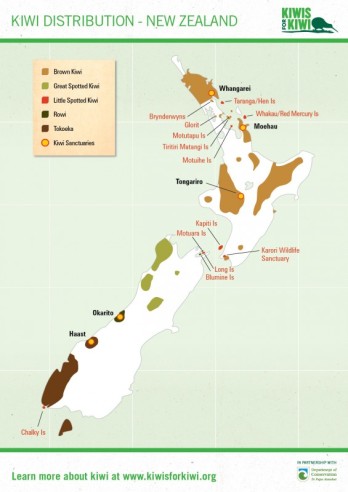 The Maori, New Zealand’s first people were the first to hunt the kiwi, but this was done so sparingly as they hold a special place in Maori tradition. It was the Europeans that really started to make life difficult for the kiwi, making it one of the most cataclysmic events in the history of kiwi evolution and within a few centuries, populations of millions crashed to such a level that they are now considered an endangered species.

Before humans arrived around 1000 years ago, there were no land mammals that preyed on birds. Predators were other birds, such as the laughing owl, eagle, goshawk and falcon. With no predators sniffing them out, kiwi and the other flightless birds could safely forage from the forest floor, living and nesting on the ground. But, the arrival of humans lead to the introduction of non- native species, which quickly started to become the biggest threat to the survival of Kiwi.

Stoats, ferrets and weasels (collectively known as mustelids) were introduced to control the plague of introduced rabbits, but as extremely effective predators, they have the ability to kill kiwi chicks weighing four to five times more than they do. Ferrets are also capable of taking down adult kiwis and destroying nests.

It is suspected that a stoat managed to nibble it’s way through this kiwi egg.

Possums were introduced to New Zealand to establish a fur trade and ‘enrich’ native biodiversity, but it wasn’t too long before concerns started being raised regarding their impacts upon crops and native forests. Scientific evidence was gathered and confirmed that possums were indeed destroying native trees and shrubs, eating the berries needed by native birds. They also eat New Zealand’s native land snail, lizards and insects, and chase birds off their nests to eat the chicks and eggs. Kiwi are also directly impacted through competition with possums for burrows and both adults and chicks can fall victim to possums.

Habitat destruction and fragmentation was and is bad news for kiwi. Although they are highly adaptable, and live in a huge range of habitats, the conversion of New Zealand’s lowland forests, wetlands dunes and estuaries to pasture or towns had the biggest impacts. They are at risk when the land is cleared and it concentrates the kiwi and their predators into smaller areas. This affects their social organisation and being ferociously territorial, less habitat meant more competition for space, pushing birds out into farmland where they are more exposed.

Cats and dogs also pose a significant threat. Cats can take a particularly heavy toll on kiwi chicks for the first 3 months of their lives, whereas dogs are particularly hard on adult birds, which is hugely detrimental as these are the breeding birds. Without them there are no eggs or chicks to keep the population stable or growing.

These threats have had a massive impact on the Kiwi – only 5% of all kiwis hatched will survive in the wild. By 1998, the population had plummeted to fewer than 100,000 birds.  By 2008 that figure had fallen even further – to about 70,000. A reduction in population sizes has shrunk the kiwi gene pool, making the bird less adaptable and increasing the risk of inbreeding as populations become fragmented and isolated.

There is hope for the kiwi as many populations are stable or increasing in areas where they are being managed. These places include Department of Conservation (DOC) kiwi sanctuaries, community-led projects and offshore island sanctuaries. These areas are protected from habitat destruction and will be subject to ongoing monitoring for not only the kiwis themselves, but also the pests and predators that are having a negative impact. Techniques for controlling these pests will then vary from trapping, to poisoning to shooting.

HOWL recently paid a visit to Rainbow Springs, a nature park which has helped the North Island population of Brown Kiwi considerably by completing the incubation of eggs artificially to boost their chances of survival. Individuals are then released back into the wild and males are fitted with a radio transmitter (as they are the incubators) so staff of the the Department of Conservation (DOC) can locate them and start the whole cycle again with new eggs following successful natural breeding. Nature parks such as this are also a great way to help people feel connected to the kiwi and to learn more about them. We were lucky enough to observe a few individuals foraging in specially built nocturnal enclosures and were amazed at how close we could view them, especially as it can be quite difficult to spot them in the wild.

But New Zealand cannot relax just yet. Many kiwi live outside managed areas and these populations are expected to decline. Even within the managed areas, uncontrolled dogs can kill many birds very quickly.

The kiwi is a biological oddity and full of character. More than any other native animal, they are entwined in the identity of New Zealanders. If the kiwi is allowed to disappear then the world would truly be losing an intriguing bird that has remained genetically unchanged for millions of years.

Efforts to conserve not only benefit the Kiwi, but actions also bring communities together, creates employment and helps restore native forests where many other native species also live, and therefore also benefit. A community based approach is essential for their survival. When you involve others, you spark a greater concern and interest, which in turn will enhance land management and pest control efforts on a greater level. Greater support also means continued and increased funding for the continuation of conservation efforts, giving the kiwi a good chance for its future in New Zealand and for New Zealanders it will preserve a big part of their identity. 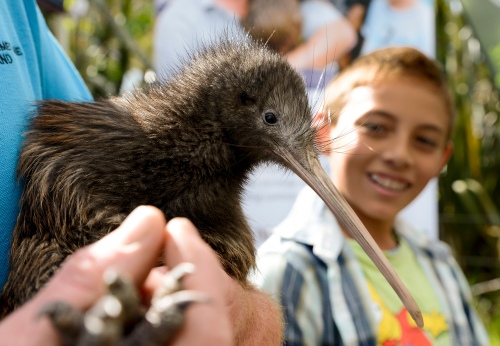